England’s game against Poland is their last before Gareth Southgate names his Euro 2020 squad; follow England vs Poland in our dedicated match blog and watch free match highlights on Sky Sports’ digital platforms 15 minutes after full-time

Phil Foden is expected to start for England as Gareth Southgate’s side take on Poland on Wednesday in their final World Cup Qualifier of this international break, while Mason Mount faces a late fitness test ahead of the game at Wembley.

Foden is expected to start the game whether or not Mount is fit after the Chelsea midfielder sat out of the first part of Tuesday’s session. He undertook recovery work in the gym, while the rest of the 24-man squad trained ahead of the match.

Southgate has delayed telling the players who will start the World Cup Qualifier to give Mount the maximum time to prove his fitness. Foden is expected to be positioned on the left of an attacking three, with Raheem Sterling on the right and Harry Kane through the middle.

Southgate’s final selection for Euro 2020 is likely to be made in late May, with the tournament kicking off on June 11 and England’s first game against Croatia at Wembley on June 13.

England will play two pre-tournament friendlies against Austria and Romania before the Euros, but Wednesday’s clash with Poland is the last competitive game before that big announcement and should help the manager further firm up ideas about personnel and formation.

Southgate will be mindful that the likes of Jordan Pickford, Jordan Henderson and Jack Grealish have missed the March internationals due to injury, but fans will be keen to see some glimpses of how England could shape up for Euro 2020.

Will Southgate pick his strongest XI?

“It’s been perfect so far, as far as Southgate is concerned – two games, two wins, no injuries and he’s been able to manage the minutes. He was asked whether he’d pick his strongest side for Poland and I just detected a hint of frustration – he understands the need to manage his relationship with Premier League clubs but stressed there comes a point when rotation has to stop so that suggested he would be playing his strongest side.

“Southgate will be trying to narrow down his squad now.

“He’ll have learned that this squad is stronger than what he had at Russia – there’s competition for places all over the pitch. There are at least another seven or eight players who are not in the squad at the moment but who have hopes of making it for the Euros.

“Certainly there are several players who missed out on this squad but, I think, will definitely be at the Euros if fit: Jordan Henderson, who’s recovering from a groin operation, Jack Grealish – everyone wants to see him play, it seems – and Jadon Sancho, who’s out injured at the moment. If they are fit, that means some players will have to drop out.

“I think Southgate’s strongest front three as he sees it are Kane, Sterling and Rashford. There was an argument six months to a year ago about Sancho vs Rashford but Sancho has had an injury, hasn’t played much, and is still maturing.

“Dominic Calvert-Lewin is absolutely the back-up to Kane and Mount has impressed me massively – I think he’s a shoo-in not just for the squad, but for the starting XI.

“A couple of other players have enhanced their prospects – Foden played really well against Albania and I think he’s almost certain to be in the squad now. Bellingham – we’ve heard Southgate speak in glowing terms about him – it seems he’ll be in the squad too. Phillips has started both games and Ward-Prowse has played well too.”

Dorsett: Pickford has consolidated No 1 spot

“This is a key game for England – they’ve only got two friendlies before the Euros so Southgate will see this as a real marker of where his side are at.

“The biggest takeaway for me so far is that in his absence, Jordan Pickford has consolidated his position as No 1. It’s strange because he hasn’t played and though I mean no disrespect to Nick Pope, who has become the first England goalkeeper to keep six clean sheets in his first six games, his distribution at times was average and poor by own high standards; Burnley don’t play the ball out from the back. If Pickford is fit, he’s No 1.

“I’m surprised Jude Bellingham hasn’t been given more game-time. I don’t think he’ll start against Poland and I get the impression Southgate has decided Mount could be that No. 8 over Bellingham, if he decides to play Mount there.

“Trent Alexander-Arnold I think is a shoo-in, I think this is only temporary. But I think it will be difficult for James Maddison to force his way in. At the moment I think it also looks like either Mings or Coady will make the squad if you think Maguire and Stones are shoo-ins and you think Dier and Walker can play in different positions. It looks like Coady, who has captained England and whom Southgate sees as a leader, is ahead of Mings in the thinking right now.”

The boss on @masonmount_10: “He didn’t warm up with the rest of the team today, but he did the rest of the session after so he should be fine.” pic.twitter.com/IGDXVckljd

There are doubts over the availability of Mason Mount. The Chelsea midfielder took part in a gym recovery session on Tuesday morning. He joined in with full training with the squad later in the day but will face a late fitness test.

Southgate said: “No, he didn’t warm up with the team but he did the rest of the session with the team. He should be fine. They are all available as far as we are concerned.”

The rest of the 25-man squad trained as normal ahead of the game at Wembley. 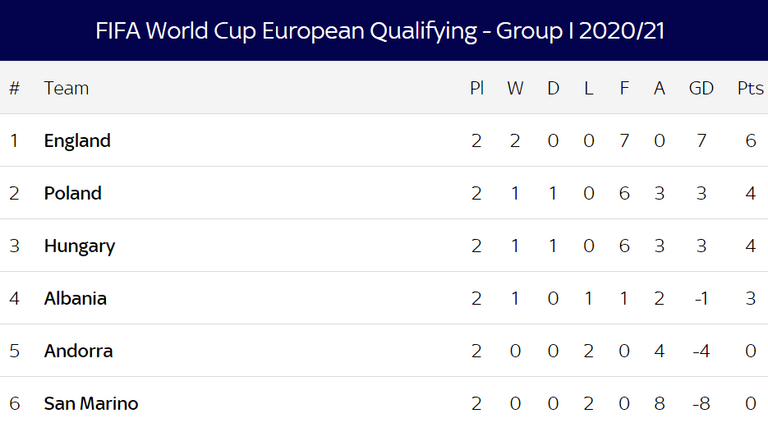 England currently lead World Cup Qualifying Group I as the only side to have won their first two matches, with Poland tied for second on four points with Hungary.

England thrashed San Marino 5-0 in their opening game on Thursday before easing to a 2-0 win in Albania on Sunday, while Poland drew 3-3 away to Hungary in their first Group I game, before winning at home to minnows Andorra.

England vs Poland – The stats

The visit of Poland has been billed as a much sterner test for Southgate and his side following their wins over San Marino and Albania, but Poland have plenty of problems of their own as they head to Wembley for what is seen as a crucial fixture in Group I.

In what is a huge blow for Paulo Sousa’s side, Robert Lewandowski will miss the game against England on Wednesday due to a knee injury.

A statement from the Polish FA on Monday morning said Lewandowski, who captains the national side, had sustained ligament damage in his right knee and would be out for up to 10 days. The 32-year-old striker, who has 42 goals in just 36 games for Bayern Munich in all competitions this season, has now returned to the German side.

However, the Polish FA has confirmed to Sky Sports News the game will go ahead as planned and Krychowiak has now returned a negative test. He is expected to join up with the squad in London and could start on Wednesday.

It means the total number of positive results in the Poland squad is now up to three after back-up goalkeeper Lukasz Skorupski and Leeds United’s Mateusz Klich were both ruled out due to the virus.

Although Poland will be without their captain and star striker in Lewandowski, Southgate will not be taking the team lightly.

He said: “I think Poland have got some excellent players and we would be naive to think they would be less of a threat.

“If we take our foot off the gas for one minute we will be hurt. We need to be ready for the game, which we are. A team isn’t just about one player and we have to prepare for the highest level.”

Gareth Southgate might be edging closer to his big Euro 2020 decision but who would be in your squad for the tournament? Pick your 23-man squad below and share your selection.

How does tour XI compare to others? Head here to find out…